The time crisis series of games is one of the biggest and most influential of the light gun games. I think that the first Time crisis was the first light gun game that I ever played in an arcade and I distinctly remember buying a psx along with the home version of Time crisis with the Gcon45 light gun just so I could play it at home and hopefully same on the £1 coins long term!

I am putting together a series looking at the classics of the liughtgun genre and it absolutely had to start with this groundbreaking series.

So here it is:

Everything you could possibly want to know about the Time Crisis Games!

Ok, first up, what does the time crisis series of games contain?

There are 5 main games and a couple of extra ones. It goes without aying that they are all light gun games, but they were and are playable on a variety of platforms from the Time crisis Acrade machines, to home consoles and also emulators. I’ll get into all that later but for now here are the games in order of release along with a quick intro to them all:

History and how to Play

The time crisis series of lightgun games has been going for a long time and as such they have been available on a wide range of systems. They have mainly been playable at home on Sony’s playstation consoles With time crisis and timacrisis Project Titan on the PSX, Time Crisis 2 and 3 on the PS2 up to Time crisis 4 and Razing Storm on the PS3. all of the time Crisis games started their life In the Arcades though and thats where most people first encountered them. I think that The Arcade is where these games shone. You had a foot pedal to duck with and normally 2 huge screens to play 2 player. On the other hand, not many people can have an arcade in their house so we have to look for the next best place to play them.

Here is the complete rundown on where each Time Crisis game is available to play. Both where it originally came out and most importantly, where and how you can play it now!

Time Crisis on the PSX

How to play Time Crisis

This is where it all started! The first home releases of the Time crisis games were on the PSX. The graphics were great at the time and it was like bringing the arcade home. Time crisis came first and then later Project Titan was released with some cool twists on the game play and improved graphics as the console matured.

The first game in the series is a classic. The graphics aren’t as polished as the rest of the series but it was the first and the light gun game that got a lot of people into the genre.

If you want to play it now, you can obviously, get a PSX, a Gcon45 and an old CRT tv and you will be up and running in a couple of minutes. If you are buying everything to get up and running, make sure that you get the Namco adapter with your gun. You have to have it (one per console as you can plug multiple lightguns in to one adapter). Its much cheaper to get it with the lightgun and they are hard to source on their own.

If you don’t have a CRT tv and you don’t want to get one then there is only one option at the moment and that is to emulate it on the PC.

Its pretty easy to get up and running with the pcxsr emulator and you will find instructions at that link.

You can use any pc compatible lightgun but I would recommend the Aimtrak for now. There are a few other possibilities on the horizons but nothing has been released as of the time of writing.

Accurately shoot the exact center of the R found in CRISIS on the main title menu. You will see cross hairs next to the word TIME. Shoot the middle of those twice. You have to be really accurate but if you do it correctly, you will get a cheat menu that will bring up options like extra lives and more.

The options for project Titan are exactly the same as for Time Crisis. You can play it in its native format or you can emulate it using pcsxr.

Project Titan is a fun game that offers more options and therefore more replay potential. Its well worth a look.

How to play Time Crisis on the PS2

The PS2 brought us 2 entries into the series but they were 2 great additions. The graphics were a huge step up from the games on the PSX and we also saw new features like different guns and a whole range of enemy types. Most importantly Time Crisis 3 introduced us to perhaps the best lightgun ever made for home console, the GCon2. It had more buttons to allow for more flexibility and it also had buttons around the grip so you could have a normal gun grip and still manage to duck to reload without moving your hand. This brought the game play closer to the Arcade versions.

How to play Time Crisis 2

Time Crisis 2 was the first release on the new PS2 and came with the new GCon2 lightgun. Its a marked improvement over the graphics of the previous games. You start out storming a beach and immediately encounter more depth to the game play as well as destructible scenery!

YOur options for playing are similar to the PSX games but with one addition.

If you re getting the original hardware then the same rules apply. Make sure you hace a Namvco adapter or you wont be able to play.

To play on the PC, I would recommend the PCXS2 emulator. Its easy to setup and offers a lot of customization. It doesn’t deed a powerful pc to run at the low settings (You can even use built in graphics) but you can really improve the graphics of the game if you have a decent graphics card as well.

How to play Time Crisis 3

Your options for playing Time crisis 3 are the same as for 2. Its a fun game and more of an incremental improvement over the previous entry in the series.

How to play Time Crisis on the PS3

By the time the PS3 came out, CRT TVs, which had been the cornerstone of lightgun games, were dying out. Flat screen LED, Plasma and LED TVs were becoming the norm and unfortunately, the technology that made lightguns work would not work on them. You can read more about that here

Namco addressed this issue by releasing the Gcon3 gun peripheral. It was a bright Orange lightgun with a directional stick stuck on the side as well as a range of buttons. Most importantly, it solves the CRT problem by working with 2 IR sensors that you positioned on your TV. This is similar to the way that the Wii works and had been the standard way of making a lightgun since then. Even Arcades use the same technology although they use a more complicated version of it with more sensors.

IR lightguns are not as good as their older relatives, mainly because they can loose calibration if you move, making real aiming difficult. They can be pretty good though. The GCon3 from Namco was a good example of the tech and worked as well as any home IR Gun.

How to play Time Crisis 4

Time Crisis 4 came out in the arcades first and then had a release on the PS3 using the Gcon3 gun controller. It introduced some more gameplay mechanics for the home release like a FPS mode that used the analog stick. The FPS mode wasn’t really up to much though and as usual the best way to play was the arcade mode.

You can emulate Time Crisis 4 on using the RPCS3 emulator. I haven’t got hat up and running as of yet but I will update here once I do.

Time Crisis Razing Storm came out on the PSC and if you dont have Time Crisis 4 already then its an excellent buy as it includes that game as well as DeadStorm Pirates (Which is an excellent light gun game) on the disc as extras.

Again, you can emulate this with RPCS3 and I will update here or on that page with instructions once I have played it.

How to play Time Crisis 5

As of now, Time Crisis 5 is only available in the Arcades. You will have to find a big arcade to play it and they are getting harder to find now.

It is unlikely that this will ever get a console release as Namco seem to have lost interest in the home market and to be fair, there are no good light gun controllers for this generation of console.

Time Crisis 5 Played in the Arcade

There are a few recent developments in the lightgun scene such as the PDP Mars and the Sinden light gun that may rekindle the interest and start getting newer games made. We can only keep our fingers crossed.

This is a great video that sums up the series from the origins or Time Crisis 1 on the ps1 to the last (for now?) entries in the console market on the ps3 Time Crisis 4 and Time Crisis Razing Storm. 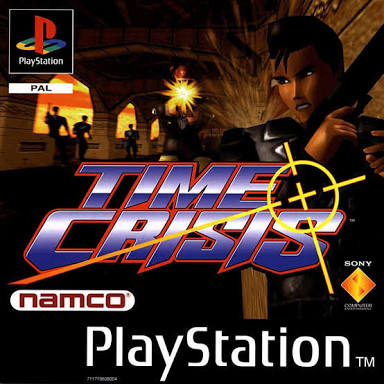 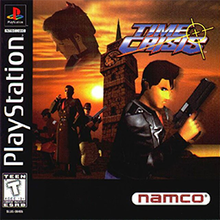 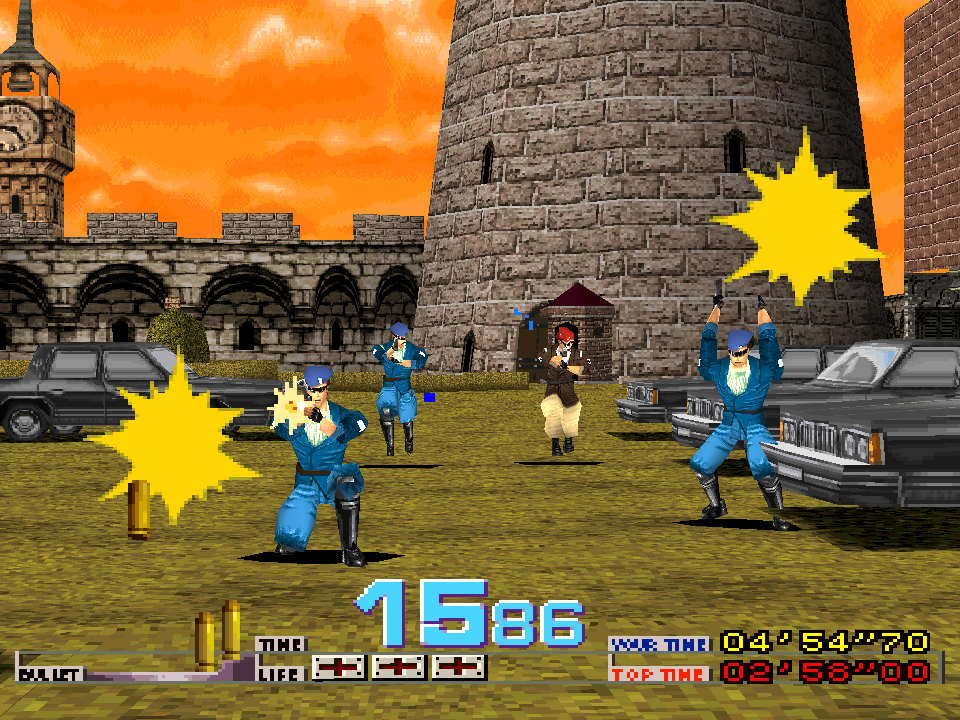 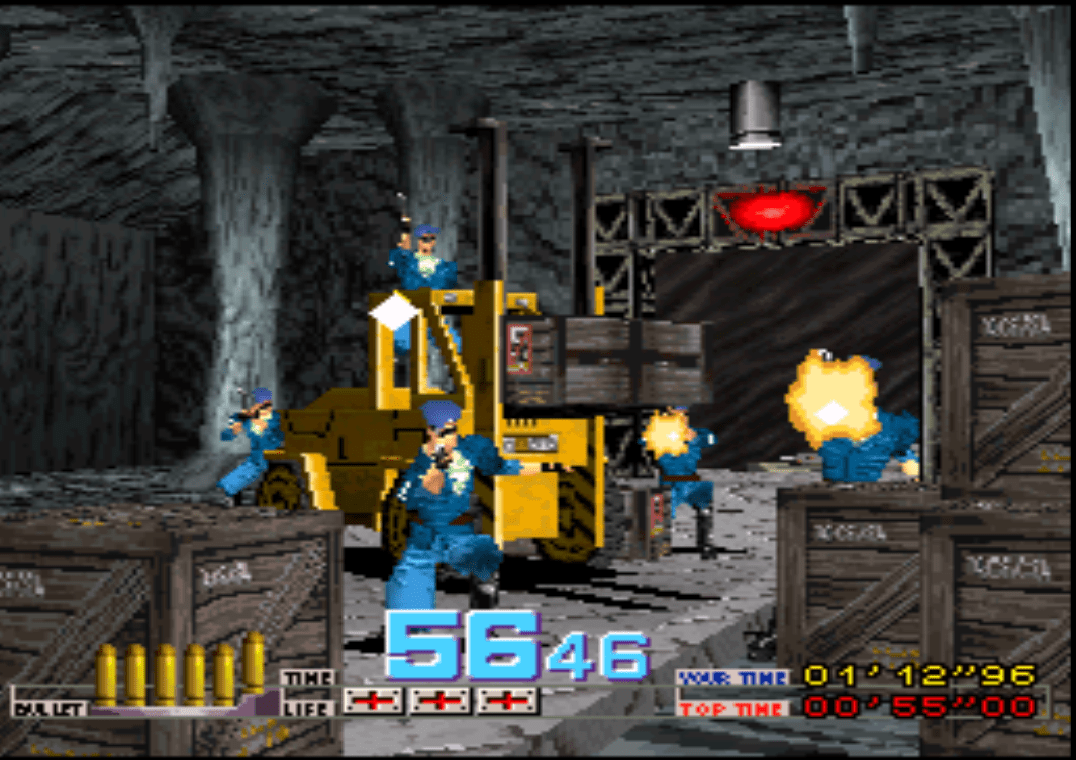 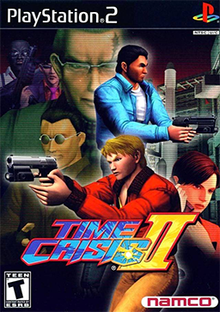 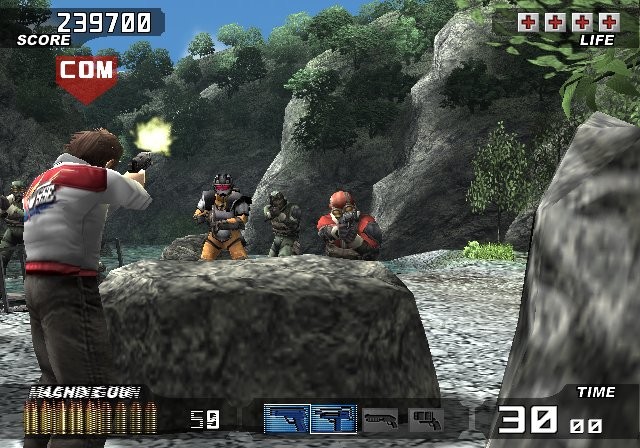 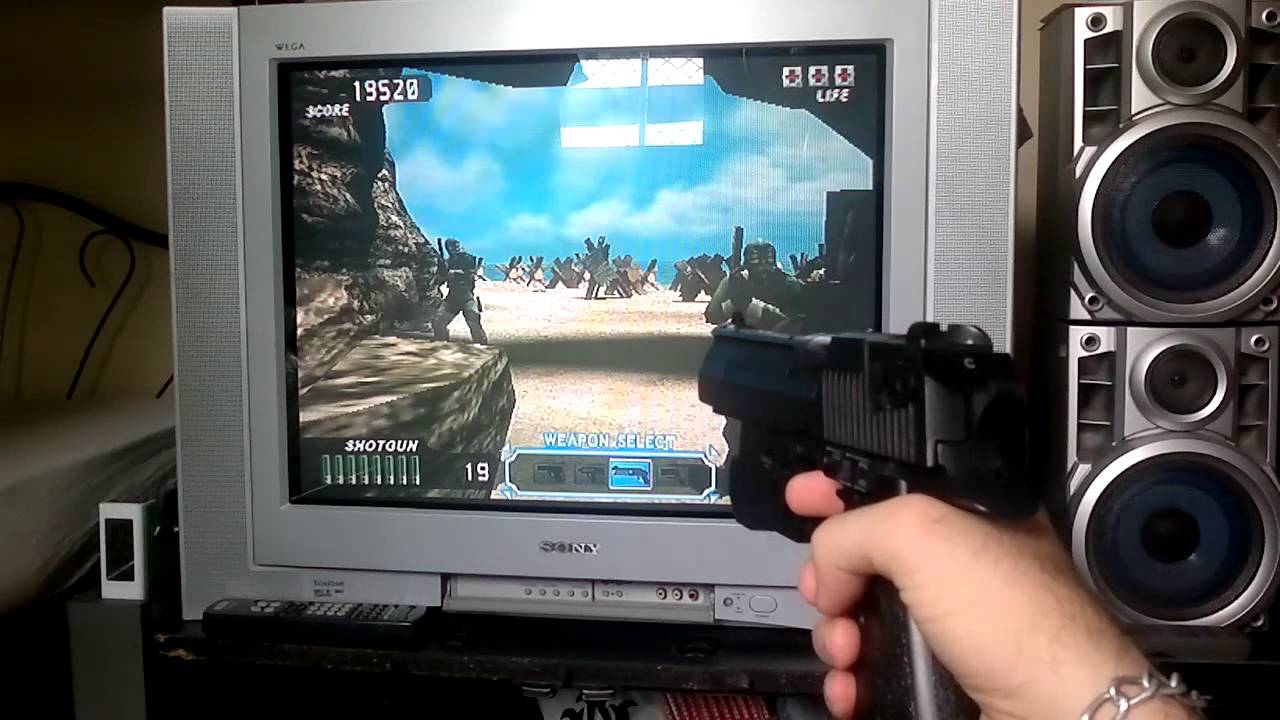 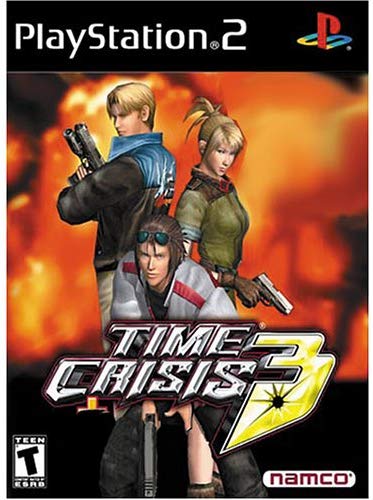 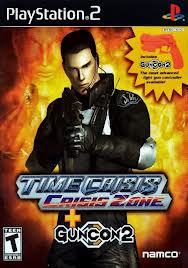 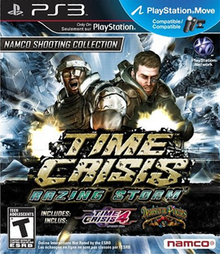 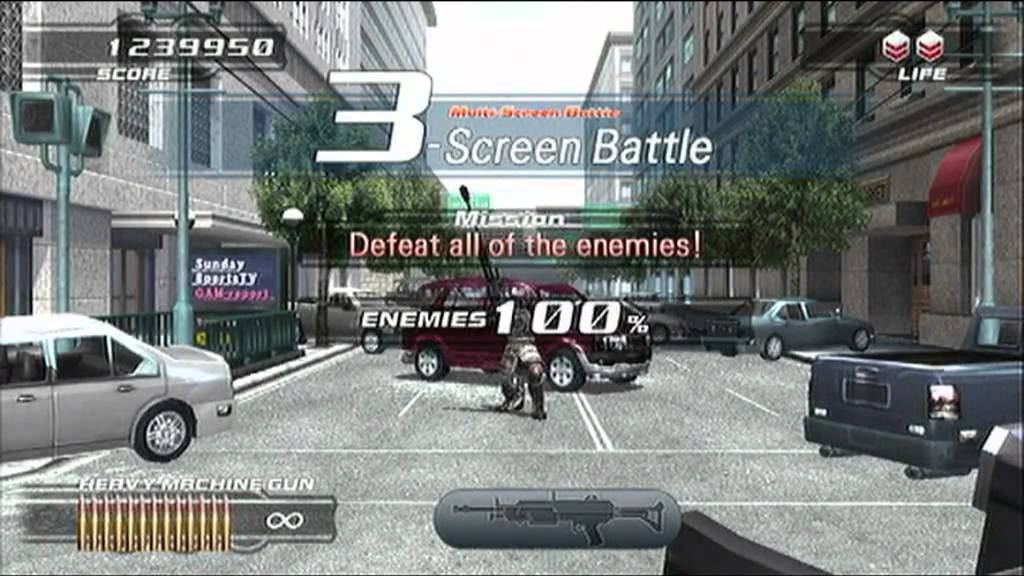 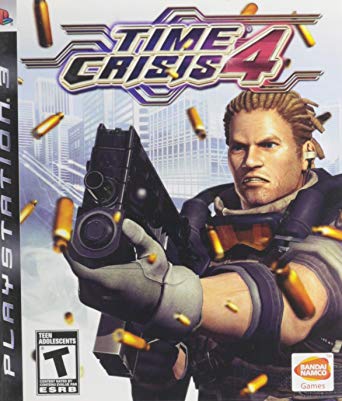 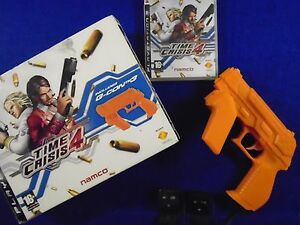 How many Time Crisis Games are there?

There are 7 main games. Time crisis 1-5 plus Time Crisis: Project Titan and Time Crisis: Razing Storm. There were also a couple of spin offs on mobile.

Can I play all the Time Crisis Games on PC with a light gun?

You can play all of the main series games with the exception of Time Crisis 5 (which is not yet available outside the Arcade) with a light gun using various emulators on the PC and other platforms.

Can you play Time Crisis on the PS4?

There are no Time Crisis Games available on the PS4

Can you play Time Crisis on the PS3?

Yes, you can play Time Crisis 4 and Time Crisis: Razing Storm on the ps3 with the Gun Con 3.

How to Build your own Lightgun